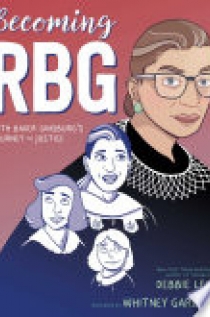 From the New York Times bestselling author of I Dissent comes a biographical graphic novel about celebrated Supreme Court justice Ruth Bader Ginsburg. Supreme Court justice Ruth Bader Ginsburg is a modern feminist icon—a leader in the fight for equal treatment of girls and women in society and the workplace. She blazed trails to the peaks of the male-centric worlds of education and law, where women had rarely risen before. Ruth Bader Ginsburg has often said that true and lasting change in society and law is accomplished slowly, one step at a time. This is how she has evolved, too. Step by step, the shy little girl became a child who questioned unfairness, who became a student who persisted despite obstacles, who became an advocate who resisted injustice, who became a judge who revered the rule of law, who became…RBG.

By Layla Beason
Sourcebooks Wonderland | March 1, 2020 | 40 pages
Dinosaurs, dinosaurs, romp, chomp, and roar! But what if we learned there was so much more? From their skin to their size, and their stomps to and fro, We should probably question all that we know! Join the fun in this silly story about how what we think we know about dinosaurs may not always stay...  END_OF_DOCUMENT_TOKEN_TO_BE_REPLACED
Kids' Books

When Aidan Became a Brother

By Kyle Lukoff
Lee & Low Books | March 31, 2020 | 32 pages
"Aidan, a transgender boy, experiences complicated emotions as he and his parents prepare for the arrival of a new baby"--   END_OF_DOCUMENT_TOKEN_TO_BE_REPLACED
Kids' Books

The Secret Life of Genes

By Derek Harvey
Firefly Books | February 15, 2019 | 192 pages
An illustrated introduction to genetics. The Secret Life of Genes is the story of genetic science and how it makes each of us unique. It spans the discovery of the gene and the all-encompassing role it plays in biology: from controlling the inner workings of cells and the development of embryos,...  END_OF_DOCUMENT_TOKEN_TO_BE_REPLACED
Kids' Books

Helpers in My Community (English/Inuktitut)