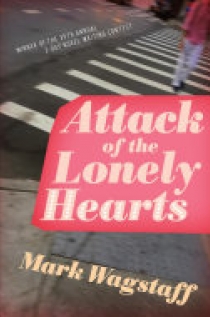 Attack of the Lonely Hearts

Fiction. Everything is just a little more difficult for poor thirty-something Margaret Rudge. Adjusting to single life after her no- good husband Tommy leaves her for a shrink, Margaret manages to snag a job slinging coffee on the street. "Everyone hooks up waiting for their latte," her sometimes-fabulous friend Cindy advises. And maybe it's good advice because it's while working at Frank's coffee cart that she meets a handsome young dancer and is drawn into the exhilarating and slightly unhinged world of a NYC modern dance company. Margaret is stuck in a jack-in-the-box, and author Mark Wagstaff expertly mans the crank, turning the lever over and over, letting eerie circus music slowly fill your head. Will she find what she's looking for? Is it hiding in the strangely lit aisles of her downstairs grocery store? Maybe it's avoiding her calls, holed up with a new girlfriend, the cognitive psychology graduate, in a condo in Phoenix. Or maybe, just maybe, it's coffee-stained and unexpectedly expected. In ATTACK OF THE LONELY HEARTS, each character is broken in their own forlorn way. A master of the dark and witty one-liner, Wagstaff manages to spin a hilarious and off- kilter story about what can happen when lonely hearts discover they're attached to even lonelier bodies.

By Amanda Anderson,  Rita Felski,  Toril Moi
Trios | March 30, 2020 | 160 pages
Over the last few decades, character-based criticism has been seen as either naive or obsolete. But now questions of character are attracting renewed interest. Making the case for a broad-based revision of our understanding of character, Character rethinks these questions from the ground up. Is it...  END_OF_DOCUMENT_TOKEN_TO_BE_REPLACED
Literature - International

By Alan Burns
Calder Publications | January 7, 2020 | 160 pages
Celebrations, Alan Burns's third novel, brings the inherent violence and oppression so apparent in Europe after the Rain into the setting of a family-owned factory, where social hierarchies, legal structures and humiliation keep the workers in line. By bringing the differences between workers...  END_OF_DOCUMENT_TOKEN_TO_BE_REPLACED
Literature - International

By Athena M. Kaiman
DAR and Earth | March 1, 2019 | 350 pages
DAR & Earth is a debut YA fantasy series rooted in accurate historical and scientific facts. ORACULI begins the odyssey of these two worlds, interconnected by a shared sun. Through the protagonist Aelish, a magical being born of human parents in 1546 Ireland, and her Oraculi, Lady Antonia, born...  END_OF_DOCUMENT_TOKEN_TO_BE_REPLACED
Literature - International

By Madeleine St John
Scribner | February 11, 2020 | 224 pages
“The book I most often give as a gift to cheer people up.” —Hilary Mantel An irresistibly charming debut novel set in a department store in Sydney in the 1950s. The women in black, so named for the black frocks they wear while working at an upscale department store called Goode’s, are run...  END_OF_DOCUMENT_TOKEN_TO_BE_REPLACED
Literature - International

Adults and Other Children