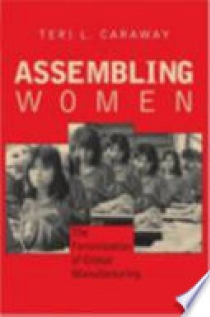 Despite the massive influx of women into the labor force as a result of globalization, the gender inqualities at work have remained largely unchanged. This book addresses two related questions: What has prompted the feminization of manufacturing work in developing countries, and why has it failed to significantly erode gender inequalities at work? Teri L. Caraway offers case studies and in-depth analysis of employment changes in Indonesia combined with cross-national data to show that the feminization of the workplace produced by industrialization policies has reconfigured and reproduced, rather than overturned, gender divisions of labor at work. Caraway challenges the conventional wisdom that export-oriented industrialization and women's cheap labor are the driving forces behind feminization. Instead, she argues, the answers can be found in weak unions and current social practice. Caraway employs information about a wide range of industries—capital-intensive, male-dominated, non-export firms as well as female-dominated, labor-intensive, export-oriented industries—in arriving at her conclusions. Her findings will prove discouraging to anyone who hopes that globalization has become a positive force in improving the lives of women workers.Caraway's multilevel methodology for analyzing changes in gendered patterns of employment and her introduction of "gendered discourses of work" as a major explanatory variable will make Assembling Women a valuable resource for women's studies scholars, development economists, political scientists, and sociologists as well as all with an interest in Southeast Asian Studies and labor and industrial relations.