Aspects of the New Right-Wing Extremism 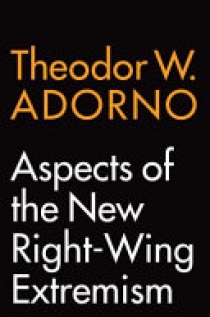 On 6 April 1967, at the invitation of the Socialist Students of Austria at the University of Vienna, Theodor W. Adorno gave a lecture which is not merely of historical interest. Against the background of the rise of the National Democratic Party of Germany, which had enjoyed remarkable electoral success in the first two years after its formation in November 1964, Adorno analysed the goals, resources and tactics of the new right-wing nationalism of this time.