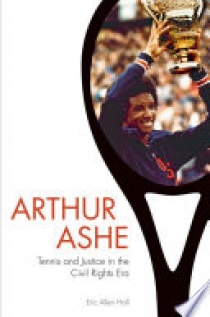 Arthur Ashe explains how this iconic African American tennis player overcame racial and class barriers to reach the top of the tennis world in the 1960s and 1970s. But more important, it follows Ashe’s evolution as an activist who had to contend with the shift from civil rights to Black Power. Off the court, and in the arena of international politics, Ashe positioned himself at the center of the black freedom movement, negotiating the poles of black nationalism and assimilation into white society. Fiercely independent and protective of his public image, he navigated the thin line between conservatives and liberals, reactionaries and radicals, the sports establishment and the black cause. Eric Allen Hall’s work examines Ashe’s life as a struggle against adversity but also a negotiation between the comforts—perhaps requirements—of tennis-star status and the felt obligation to protest the discriminatory barriers the white world constructed to keep black people "in their place." Drawing on coverage of Ashe’s athletic career and social activism in domestic and international publications, archives including the Ashe Papers, and a variety of published memoirs and interviews, Hall has created an intimate, nuanced portrait of a great athlete who stood at the crossroads of sports and equal justice. "Hall’s elegant and well-paced narrative teases out the contradictions of one of tennis’s most enigmatic characters."— Times Literary Supplement "A strong book on an outstanding topic, it serves as a reminder that Ashe's tragic death has to some extent eclipsed his life's work on behalf of racial equality."— Wall Street Journal "A portrait of Arthur Ashe that shows the fullness of his character—his broad interests, his impressive talents, and his missteps."—New Books in Sports "A remarkable book that will serve as a model for future works in this genre."— Virginia Magazine of History and Biography Eric Allen Hall is an assistant professor of history at Georgia Southern University, Statesboro.