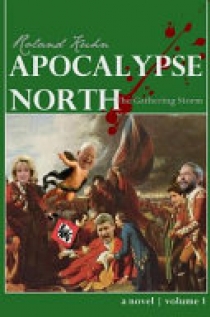 In Volume 1 of Roland Kuhn's darkly comic novel "Apocalypse North," a young man in a small Ontario town ponders the perplexities of his life as a first-year university student. Should he date the poetic Keiko, the athletic Meg, the temperamental actress Daphne - or all of them? Can he prevent his eccentric father, dressed as a woman, from visiting his campus? Why is Professor Svensen, the icily beautiful Swedish genius, behaving so oddly, and can he pass her Economics course? Storm clouds are gathering over Canada. Soon, the university campus where he flirted, and occasionally attended class, will be a battlefield in a brutal civil war. He himself will become a hardened saboteur operating behind enemy lines. Seen through the eyes of an obese, cross-dressing computer geek, this story of intrigue, love, and treachery is unlike any Canadian novel you've ever read. Volume 2 will bring the story to a thrilling and disturbing conclusion.