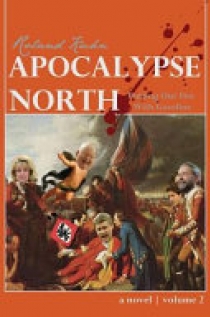 As Volume 2 of "Apocalypse North" begins, the wily Bloc Qu�b�cois Prime Minister of Canada, Gilles Luthier, has his back to the wall. Federal drones darken the prairie sky, but they are doing little to slow the eastward advance of troops loyal to the Lord Protector of the Greater Alberta States, former Prime Minister Stebbin Harpoon. In Toronto, Harpoon's ally, Mayor Rob Ford, undergoes a religious conversion and imposes a brutal Caliphate on his citizens. Can Gilles Luthier win the civil war and hold Canada together? Can he trust the Public Service of Canada, now that Lord Protector Harpoon's cyber-hackers have deleted its members' pensions? Will the narrator, a cross-dressing computer geek, defect to the other side? Will the narrator's son survive his risky liaison with Moira Magdalen Kelly, the green-eyed temptress and spy? Why does Vice-Chairman Chiang of the Communist Party of China have a blue left eye? Volume 2 of "Apocalypse North" brings this tale to a darkly comic conclusion.