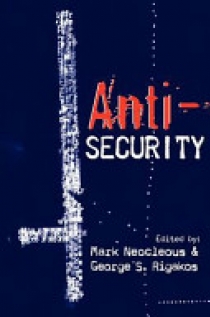 Security has reached an analytic blockage. The more security seems post-political, post-social, or even post-modern the more it escapes analytic scrutiny. The more security attaches itself to innumerable social relationships the more it becomes the very glue that binds social reality. Social problems become security problems while projects of pacification continue to be legitimized under the rubric of security. To be against security today is to stand against the entire global economic system. If security has become the dominant, perhaps impenetrable concept of our times, then we must start entertaining the impossible. We must begin asking: what would doing anti-security look like? Also contains "Anti-Security: A Declaration" (by Neocleous & Rigakos) Contents: Introduction 7; Anti-Security: A Declaration 15; [1] Security as Pacification, by: Mark Neocleous; [2] 'To Extend the Scope of Productive Labour': Pacification as a Police Project, by: George S. Rigakos; [3] Public Policing, Private Security, Pacifying Populations, by: Michael Kempa; [4] War on the Poor: Urban Poverty, Target Policing and Social Control, by: Gaetan Heroux; [5] 'Poor Rogues' and Social Police: Subsistence Wages, Payday Lending and the Politics of Security, by: Olena Kobzar; [6] Liberal Intellectuals and the Politics of Security, by: Will Jackson; [7] Security: Resistance, by: Heidi Rimke; [8] Security and the Void: Aleatory Materialism contra Governmentality, by: Ronjon Paul Datta; [9] 'All the People Necessary Will Die to Achieve Security', by: Guillermina Seri; Notes on contributors ..".'punches a hole' in the body of the depressingly 'pacified' strand of scholarship that police sociology has become..." - Georgios Papanicolaou, Teeside University