An Act of Injustice 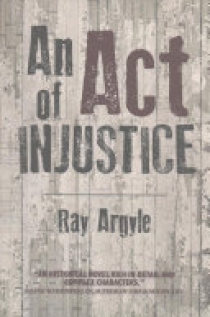 "A bride, a groom, and a lover. Each with secrets from their past that when exposed, will change their lives forever. One will die, another will hang, and the survivor will begin an obsessive twenty-year odyssey to discover the truth. Three people caught up in the harsh class differences and religious and racial prejudices of Victorian Canada, where a vast new territory - the "Queen's Bush" - is being opened to settlement in Ontario's Georgian Bay country. Inspired by the true lives of Rosannah Leppard and Cook Teets, real people who lived and loved, An Act of Injustice follows disgruntled newspaperman Leonard Babington in a combination courtroom drama, murder mystery, and a meditation on the moral malaise of Victorian Canada. His obsession to find the killer plunges him into the labyrinth world of Ottawa power politics, the salons of a smug and self-satisfied "Toronto the Good," and the licentiousness of the city's Insane Asylum. Ray Argyle achieves literary distinction and story telling mastery in this Canadian historical novel that brings the urgency of today's headlines to the struggle for romance, justice and equality in a young Canada making its way into the 20th Century."--