All of Us with Wings 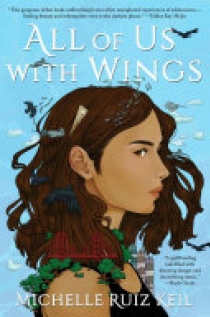 Seventeen-year-old Xochi is on her own in San Francisco, running from a painful past. On a visit to Golden Gate Park, she meets Pallas, a precocious twelve-year-old with a rockstar family that lives in one of the city's storybook Victorian mansions. Xochi accepts a position as Pallas's live-in governess and quickly becomes part of the band's household, fascinated by their free-love philosophy and the happy calm that balances out their glamorous music personas. But on the night of the Vernal Equinox, as a concert afterparty rages in the house below, Xochi and Pallas perform a pagan ritual that unintentionally summons a pair of ancient creatures devoted to righting the wrongs of Xochi's adolescence. She'd do anything to preserve her new life, but the nightmares of her past are never far behind- the mother who abandoned her, the man who betrayed her, and the loving grandmother whose death left Xochi alone in the world. With the creatures determined to exact vengeance on those who've hurt her, no one in Xochi's life is safe-not the family she's chosen, nor the one she left behind.