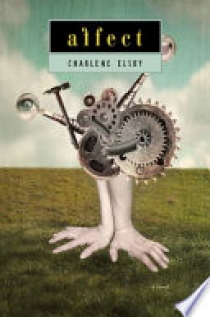 Have you ever met a person who actually seems larger than life? I did, once, just where you’d least expect him to be (standing around), in an environment you wouldn’t be able to fit him into (the courtyard outside the Philosophy building), if the concept meant what it implies. Such a being makes us question whether we are, in fact, so limited, with the one life and the one death, and nothing else to reasonably look forward to, whether the whole system is flawed, whether it’s not the case that they’ve cheated the system and come out on the other side of it still living, living more, doing something more than living. That was Logan for me. Affect is the story of a hyper-rational and unapologetically cerebral philosophy graduate student, obsessed with both death and Logan. Their relationship develops through a series of surreal events (in which corpses appear with disturbing frequence), where Logan comes to infiltrate the narrator’s psyche and occasions the collision of her interior and exterior worlds. Affect examines and interprets, in prose that is spare, poetic, and philosophical, how we think about life and death, time and distance, and the deeply affecting effects of an intense entanglement of a ‘one’ with an ‘other’.