A World After Liberalism 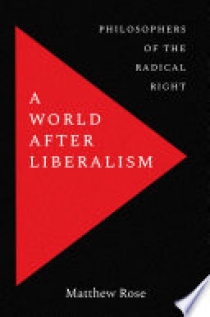 A bracing account of liberalism's most radical critics, introducing one of the most controversial movements of the twentieth century In this eye-opening book, Matthew Rose introduces us to one of the most controversial intellectual movements of the twentieth century, the "radical right," and discusses its adherents' different attempts to imagine political societies after the death or decline of liberalism.