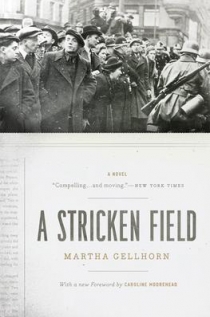 Martha Gellhorn was one of the first—and most widely read—female war correspondents of the twentieth century. She is best known for her fearless reporting in Europe before and during WWII and for her brief marriage to Ernest Hemingway, but she was also an acclaimed novelist.
In 1938, before the Munich pact, Gellhorn visited Prague and witnessed its transformation from a proud democracy preparing to battle Hitler to a country occupied by the German army. Born out of this experience, A Stricken Field follows a journalist who returns to Prague after its annexation and finds her efforts to obtain help for the refugees and to convey the shocking state of the country both frustrating and futile. A convincing account of a people under the brutal oppression of the Gestapo, A Stricken Field is Gellhorn’s most powerful work of fiction.

“[A] brave, final novel. Its writing is quick with movement and with sympathy; its people alive with death, if one can put it that way. It leaves one with aching heart and questing mind.”—New York Herald Tribune

“The translation of [Gellhorn’s] personal testimony into the form of a novel has . . . force and point.”—Times Literary Supplement