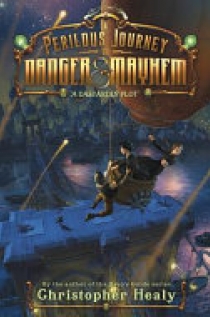 A Perilous Journey of Danger and Mayhem #1: A Dastardly Plot

A rip-roaring, hilarious alternate-history adventure starring the world’s most famous inventors—and its most forgotten. From the author of the beloved Hero’s Guide series, Christopher Healy. It's 1883—the Age of Invention! A time when great men like Thomas Edison, Alexander Graham Bell, Nicola Tesla, and George Eastman work to turn the country into a land of limitless opportunity. And it all happens at the world famous Inventor’s Guild headquarters in New York City—a place where a great idea, a lot of hard work, and a little bit of luck can find you rubbing elbows with these gods of industry who will usher humanity into the future. Unless, of course, you’re a woman. Molly Pepper, daughter of brilliant but unknown inventor Cassandra Pepper, lives with her mother in New York. By day, they make ends meet running a pickle shop; but by night, they toil and dream of Cassandra taking her place among the most famous inventors in America. In an attempt to find a way to exhibit Cass’s work at the World’s Fair, they break into the Inventor's Guild, where they discover a mysterious plot to destroy New York. The evidence points to the involvement of one of the world’s most famous inventors, and now it’s up to Molly, Cassandra, and a shop hand named Emmett Lee to uncover the truth—even if no one will ever know it was they who did it. “Christopher Healy, author of the Hero’s Guide series, knows how to tell a good story. He’s done it again with the adventures of a determined girl named Molly Pepper.”—Brightly, Best Middle Grade Books of Fall 2018

By Jennifer Bryant
Abrams Books for Young Readers | March 29, 2020 | 48 pages
A celebration of August Wilson's journey from a child in Pittsburgh to one of America's greatest playwrights August Wilson (1945-2005) was a two-time Pulitzer Prize-winning playwright who had a particular talent for capturing the authentic, everyday voice of black Americans. As a child, he read off...  END_OF_DOCUMENT_TOKEN_TO_BE_REPLACED
Kids' Books

By Barbara Reid
Scholastic Canada | April 1, 2014 | 29 pages
Barbara Reid brings her signature Plasticine illustrations and a modern twist to this classic Grimm fairy tale - now in a leveled reader format with all-new text! When Rupert does a good deed for a stranger, he is rewarded with a beautiful golden goose. He takes the bird into town to share his rare...  END_OF_DOCUMENT_TOKEN_TO_BE_REPLACED
Kids' Books

By Geronimo Stilton
Scholastic Paperbacks | October 1, 2019 | 128 pages
When you're with Geronimo Stilton, it's always a fabumouse adventure! New Mouse City was having its first film festival! Famouse directors around the world had submitted their very best movies for a chance at the big prize. But at the big screening, Mousen Scorsese's newest film goes missing! Who...  END_OF_DOCUMENT_TOKEN_TO_BE_REPLACED
Kids' Books

By Anna Branford,  Elanna Allen
Simon and Schuster | February 5, 2013 | 114 pages
With her knack for seeing the positive, six-year-old Violet anticipates extraordinary results after getting her tonsils removed, such as making a special new friend and turning her everyday voice into an opera voice.   END_OF_DOCUMENT_TOKEN_TO_BE_REPLACED
Kids' Books

By Norton Juster
Yearling Books | March 29, 1996 | 256 pages
A journey through a land where Milo learns the importance of words and numbers provides a cure for his boredom.   END_OF_DOCUMENT_TOKEN_TO_BE_REPLACED
Kids' Books