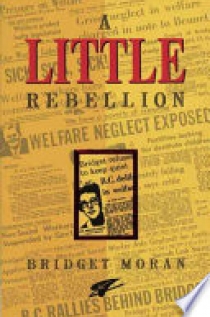 In 1964, social worker Bridget Moran attracted widespread attention and the wrath of the BC government with her open letter to Premier W.A.C. Bennett, charging the welfare department with gross neglect in addressing the problems of the province's needy. This very public dispute formed a small part of Bridget Moran's "little rebellion" against a system she felt did not, and does not, respond to the needs of those it was designed to help. A Little Rebellion is a moving portrait of a fiery and outspoken woman whose ongoing activism is inspired by a deeply-felt desire for social and political justice. Now in its 5th printing.